If you frequent the Dimond, you’ve probably noticed many “beauty spots,” areas where flowers and shrubs are planted and cared for. Have you ever wondered how it all happens? Well, it’s a remarkable range of volunteers—some independent and others connected with organizations. They all share a love of plants and community, and dedication to keep it all thriving.

This page highlights those spots and the wonderful people who do the tending. Alex Park, a member of DIA’s Beautification Committee, is collecting their stories firsthand. What follows is in their words, with light editing. Eventually, we’ll have a dozen or so profiles. Here are our first four. 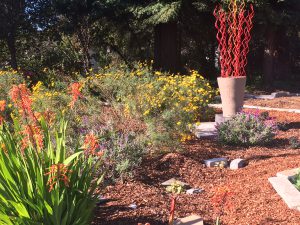 THE ROGUE GARDENER, as he is fondly known, tends the ever expanding garden at Woodbine Corner, to the right of eastbound I-580’s Fruitvale exit.

The corner was originally improved by a joint city-community project that created a river rock garden and mosaics back in 2012. But just as DIA and Friends of Sausal Creek were poised to plant a natives garden in 2017, the anonymous gardener took over! Since then, he has singlehandedly bought, planted, and tended everything. He’s also added several art elements.

We leave this message for the Rogue Gardener: Whoever you are, if you happen to see this, we so appreciate your generous spirit, and we would love to know more about you. Please get in touch at dia@dimondnews.org. 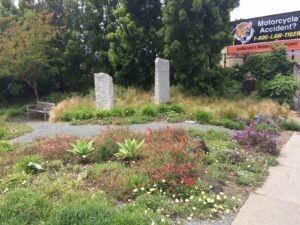 TRICIA CHRISTOPHER is a landscape architect and community volunteer who designed and maintains the Dimond Gateway Garden at the intersection of MacArthur Blvd. and Lincoln Ave. Tricia spoke with Alex in July 2019, at the garden.

We started the project in the 1990s, and it was completed late 1999, so we’re about to have our 20-year anniversary. It was a weed-strewn lot and we wanted it to be an entrance, a welcome, to the Dimond Business District. And we wanted a piece of art to establish it as a place. We got some money for the installation. The city pitched in funds and helped put in the irrigation.

That was a lot of effort. When something like this goes in, everyone thinks “Oh, good, done!” But it’s not like that. You have to maintain it. I did it for about ten years, and then my husband Tom took over, and he’s done it for another ten years. We’re not very organized, so we usually don’t have that many people helping.

The best part of this park is how people appreciate it. When people drive by and see us working there, they honk, they say thank you. It is the most rewarding thing I’ve worked on. I normally do residential landscape design, and that’s rewarding too, but it’s limited to the family that lives in the house. This is very public. 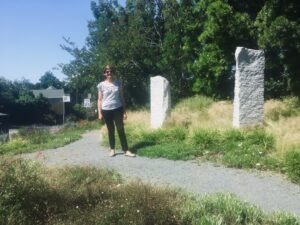 It’s been a lot of work to get plants to grow in this horrible soil, but it’s gotten better over the years. People have asked for natives, and I’ve tried. But they just die. We have lavender and rosemary. The orange flowers—Mexican lobelia–are newer.

The amazing thing is that we’ve had very little vandalism that’s intentional. A couple times, a car has driven over the landscaping, and there’s been graffiti once on the sculptures. I think people get that it’s not some government thing: It’s community-based. People enjoy it a lot.

(Note: This interview was conducted just weeks before someone took to ripping off tree branches in the garden. Tricia and others are trying to stop the vandalism, but it’s not easy.) 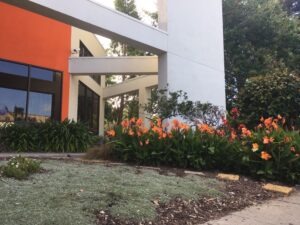 KAREN LONG currently heads the Friends of Dimond Library, and for the last ten years, she’s maintained the garden in front of the building. Karen spoke with Alex in July 2019.

The Friends of Dimond Library and I adopted the garden. It goes all the way along the front, and also the back. Once or twice a year, we just clear the back out, but other than that, it doesn’t get much water, and we don’t do anything there.

Recently, the city gave us a new irrigation control system, and is now helping us find where the old, buried sprinkler heads are. There are some I didn’t even know about. The library was built in 1980, and the garden was, I think, put in soon after that, along with the irrigation system. The back area wasn’t getting any water, because the system wasn’t turned on, but there are patches with some nice plants.

There was a theme some time ago, before I got involved. Gracie Moon, a local landscape designer, put in an old wooden boat and filled it with succulents. It was very cute, except that, being wood, it eventually rotted. She tried really hard to find another wooden boat, but there aren’t a lot sitting around.

I found out the hard way that people like to walk through the garden, and if you try to stop them, they’re going to do it anyway. That’s why I put pavers in one area and mulch in another. We decided not to fight them.

I want to get more succulents. They’re low maintenance and they don’t take a lot of water. I would say that’s what the theme is now.

There’s a rose way down at the end. An older gentleman, in his seventies, came by a couple years ago and said, “Oh, I planted that.” He must have done that quite a while ago. You couldn’t see the rose very well because it was behind a big shrub, but that also means nobody has taken it. 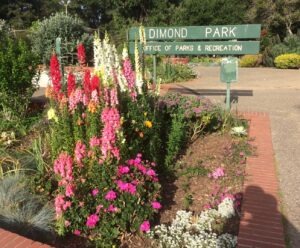 JIM CUNNIFF is a volunteer who maintains the garden at Dimond Park’s main entrance on Fruitvale under the City of Oakland’s Adopt-a-Spot program. Jim spoke to Alex in December 2018, while Jim and DIA boardmember Marion Mills were planting daffodil bulbs.

I have a balcony that looks onto the park and really love it. It’s a condo, so I don’t have a yard. I grew up with a yard and gardening, so this became sort of a place for me to do some gardening. I knew the city was not maintaining this, so over the years it had gotten pretty overgrown. I started doing some weeding, and doing some plantings, and it got better. 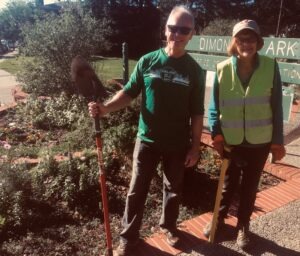 There used to be another garden, right along the fence, but the city couldn’t maintain it. I looked out there one day and they were bulldozing it. I was afraid they were going to bulldoze this, too, so I decided I’d take care of it. That way, it has a better chance of surviving.

My partner, Arnell, and I do it, mostly. I’m semi-retired now, so I have more time. Last year I met Marion, who was out here planting daffodil bulbs through the Keep Oakland Beautiful program. I came out and said, “You want some help?” This is now our second year working together.

It would be great to have more volunteers. It’s not my park, and I want the community to use it. Whenever I’m here, neighbors are always very appreciative. 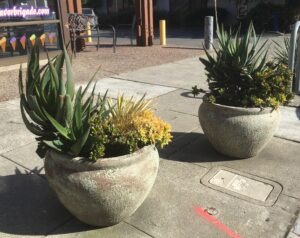 KATHY CASKEY is a volunteer who oversees planting, watering, and maintenance for more than a dozen big planter pots in the Dimond business district. Kathy spoke with Alex in April 2019.

I get to organize people, and make sure we’ve got follow-through. Once a month, I’m out looking at the pots, checking that the watering is being maintained. It’s on a volunteer basis, so it flows as volunteer work does. I do the planting, and the weeding and feeding, that kind of thing. Also selecting the pots, and determining what goes in them. Certain things have survived and taken over, and others, after multiple attempts, they’re not making it.

I think the biggest challenge is the water maintenance issue, because people have to bring containers and water, usually from home. We do have some really good business owners who are helping. That’s the ideal situation, because they have water nearby, and work nearby.

We’re an aging group. We’re hanging in there with what we can do physically, but if these pots, especially the big ones, need to be repotted, really redone–which they will—we’ll need some younger volunteers.

The best thing about the pots is volunteers can work independently. They can just show up when they want. I can show up and do my thing. I love that.